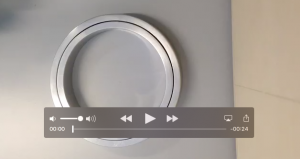 This work by Adriaan van Strien is known as the Ball-bearing Bracelet. It is made out of two bent aluminium tubes. A ball-bearing on the inside of the bracelet enables the two circles to move independently of each other. The bracelet is one in a series that explores the possibilities of movement. The bracelets were multiplied in small series, and were available in narrow and a wider versions. The bracelet was part of Serie Sieraad (Series Jewellery), initiated by Gallery Sieraad (1969-1975) in Amsterdam. The aim was to produce affordable and simply reproducible jewellery for a young audience.